Standard by artdirection July 29, 2015 No Comments 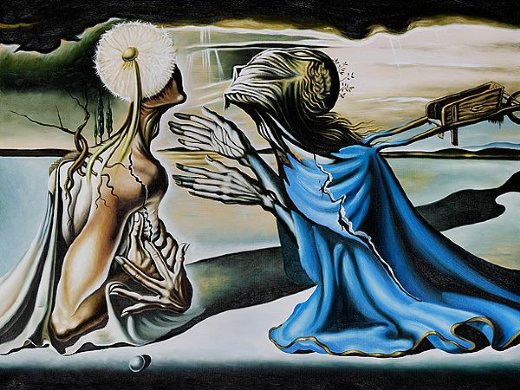 Cornish King Tristan was madly in love with Irish princess Isolde in the 12th century, and this passion was captured effortlessly by Salvador Dali. One of his most famous artworks renowned in Australia is the poster for the ballad set between Tristan And Isolde. The concept of an adulterous love affair was boldly portrayed in Salvador Dali’s painting for this ballad and beautifully conveys the message of deep, passionate love.

You can see in the painting the love that the two characters share for each other and how they must fight society to stay strong. They look lovingly and deeply into each other’s eyes as they are madly and passionately in love. This concept is easily depicted by Salvador, who uses his paranoia concept to create a realistic image of this love between the two main characters.

He engages the viewers by making them think of abstract imaginary concepts as reality and keeps them glued to the paintings. The main aim of this painting is to make you think that this imaginary concept is genuine with the vivid contrast of colours and art forms. The surreal realm is conveyed with such force that viewers can’t help but merge the unreal realm with the natural world and embrace this painting.

Created for a love ballet that was scrapped due to the war, this artwork became famous worldwide and is held in great respect by many art connoisseurs and depicts the importance of art and culture. This oil painting is a beautiful canvas, and the size is 30×40 large and can be hung easily to give a clear view of this brilliant concept.

Salvador Dali was a brilliant surrealist painter, and his concepts of the imaginary mixing with the real world can be seen in his other works like:

These and many more such paintings by Salvador Dali are famous all over the globe, and he is one of the biggest supporters of the surrealist impulse, which was a significant movement during that period. He wanted to bring out the creativity of the imaginary world and use it to depict a realistic narrative. His paintings are a magical sight to behold, and you must come and check out his masterpieces to get an idea of his concepts.